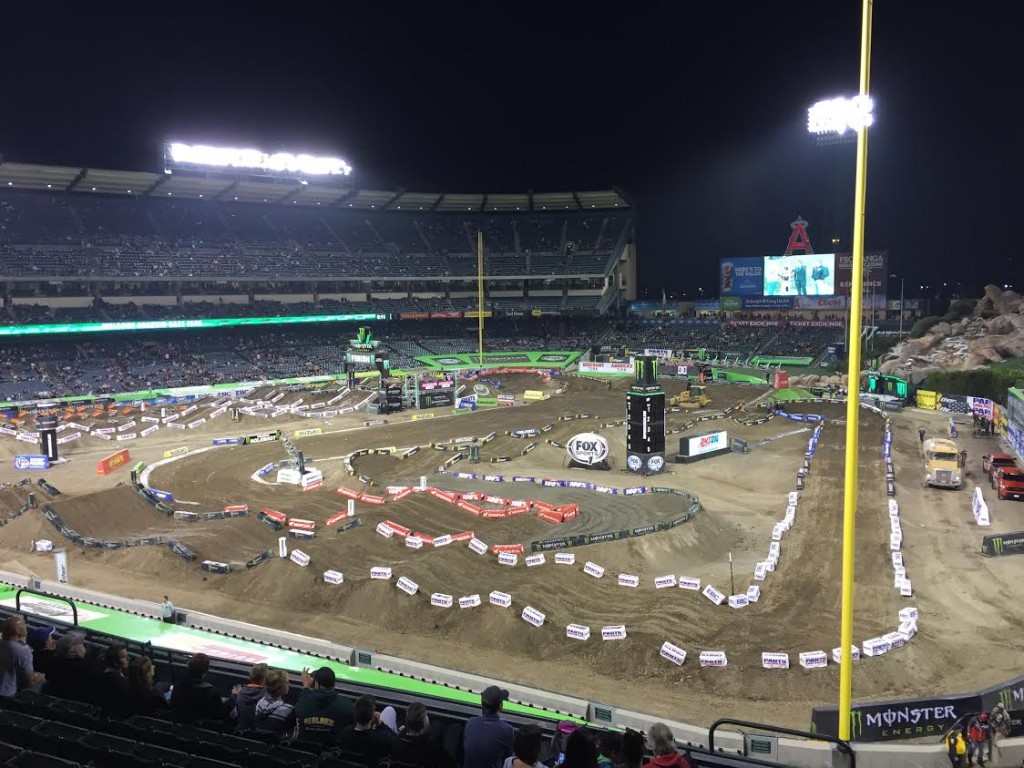 It was only a few years ago that Nicole MacDonald got the bug for motocross, but in that short time, she’s gone from riding in fields to double-classing motos at Sand Del Lee every weekend and not knowing a triple from a double, to being more than well versed in the personalities and lifestyle behind the coolest sport in the world.
Living in Ottawa, Nicole spends a lot of riding and racing at nearby Sand Del Lee and so decided to put her efforts towards completing MX101’s Ironman Motocross Series, which rewards those racers who enter two classes at every round, with a chance to win a three-night, four-day vacation in sunny California. Included is airfare for two, accommodations, passes to  the Anaheim 3 Supercross and a tour of the many motocross hot spots and factory test tracks throughout Southern California. MX101 calls it the “The Factory Fan Experience.” (Or #FactoryFan for you social media maniacs.)
Pretty cool, eh? So you can imagine Nicole’s reaction when the 28-year-old Environmental Engineer learned that she was the recipient of MX101’s Factory Fan Experience. It’s safe to say that motocross is rooting deeply into this young woman’s heart. We wanted to find out more about her short but productive history so far in racing–and what it was like hanging out ‘behind the scenes’ of SX in Sunny SoCal a week ago. 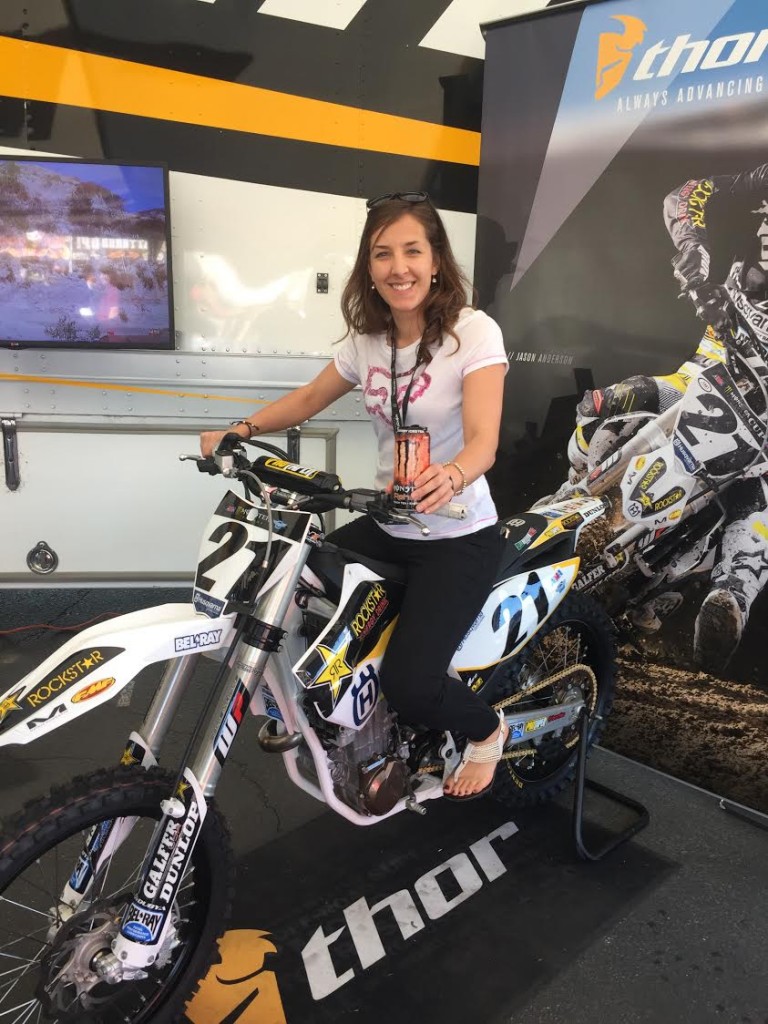 Nicole taking a seat on Jason Anderson’s Husqvarna 450 in the Anaheim pits.

Ryan Dungey killing the whoops at the KTM/Husky test track.

MX101: Hi Nicole, welcome back from your ‘Factory Fan’ experience weekend in Anaheim. Congratulations! You must have been pretty excited to hear your name called out when they announced the winner of the contest.
Nicole MacDonald: Oh man … I almost fainted! I had kept saying that I was going to win and when they actually said my name at the end of it, I was like, ‘Oh my god, are you kidding?!’ It was at the last race and I was up in front of everyone. I was so excited, but started feeling embarrassed and wanted to get down [laughs].

What’s your background with motocross? How did you get into racing?
I got into motocross only a few years ago. Last year was my first , full year of racing. I only learned to ride a couple of years before that. I liked riding but I didn’t like going every weekend and just watching everyone else race. I’m getting better slowly but surely, but it’s really addictive and I want to keep going. I saw MX101’s contest before last year’s racing season, and since I wanted to do all of the races anyways, I thought, ‘Hey, let’s do it – I want to win this trip!’ Right from the beginning, I kept saying that I was going to win it and then I did [laughs]! Positive thinking! 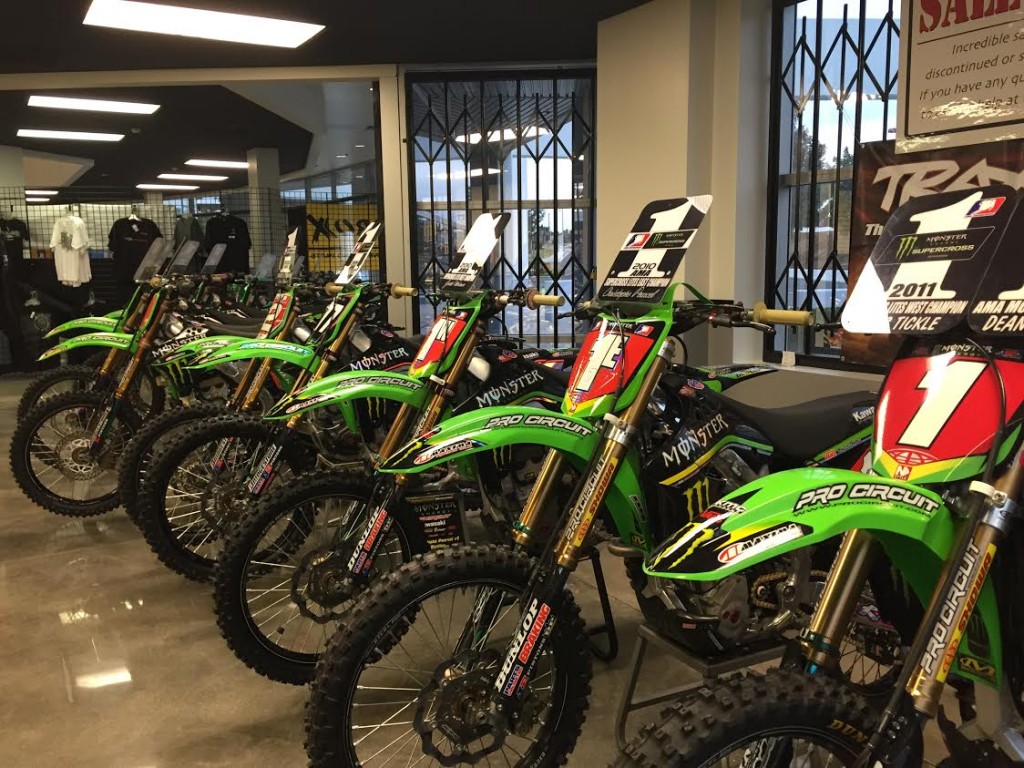 Did you watch or follow supercross or motocross before stepping onto a bike?
I really didn’t even know about the sport; I just found out about motocross when I got to the Ottawa area; I’m originally from Halifax. I started into it around 25 for fun. I went out onto the track a bit, started riding on fields and rode in some sand pits, that kind of thing. At first, I found that it was really difficult and frustrating. I couldn’t get it … and then finally it all clicked together and it was like, ‘Okay, this is how you do it!’ Now I can’t get enough of this sport!

So you didn’t know anything at all about motocross before getting onto a bike at 25?
It was all brand new to me. I knew nothing of motocross. I was into figure skating and soccer and a few other things.

Prior to Anaheim 3, had you been to a supercross before?
I went to the Monster Energy Cup a couple of years ago, in Vegas. So I did see one race before, but this time in Anaheim, we were much closer to the action and it was more exciting; I knew more about it and who the riders are. Before it was still cool to watch, but I’m more into it now and it’s more enjoyable to follow. 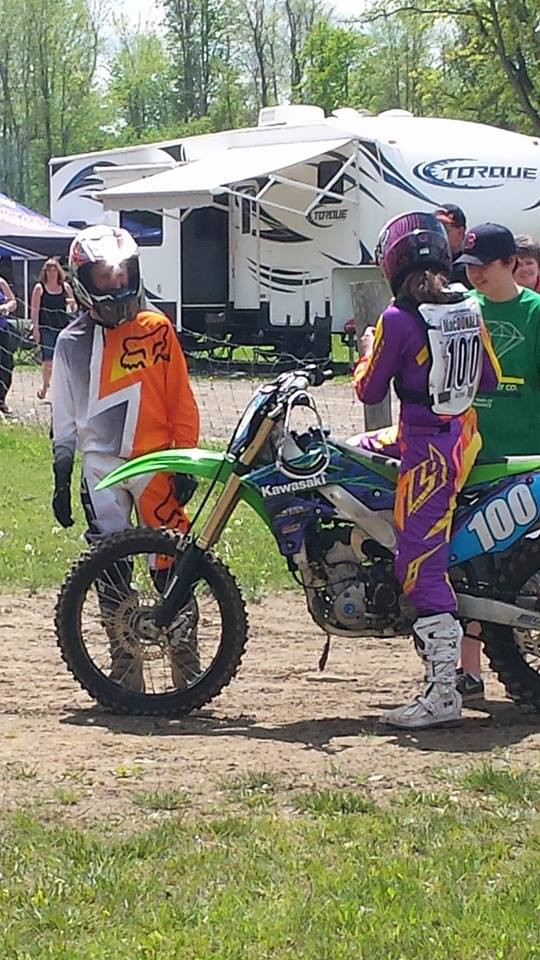 Nicole started into motocross only a few years ago, but is quickly adapting to the sport and spends most of her weekends at the SDL track.

Who’s your favourite supercross rider?
I have a couple of favourites. I always liked Ryan Villopoto and Ryan Dungey. I did see Dungey  when we were away, actually. Not up close at the race, but at one of the test tracks. We heard from one of the track workers at a test track that Dungey would be there the next day so we came back and there he was! It was really cool. We were on the other side of the fence watching him ride. Adam Cianciarulo was there watching. He was hanging out and taking lots of pictures, and was also parked outside the fence, where we were watching. We asked for a picture and he said sure. Dungey was inside so we couldn’t get too close and when he drove by, we said hi and he waved back to us, but I was too nervous to ask to take a picture.

What is about Dungey that you like so much?
I like the way he carries himself in his interviews, how he talks and how hard he works at it. It’s definitely inspiring.

I’ve had a chance to visit some of the test tracks and public tracks in California. It’s almost surreal how you can just pick a track each day and go watch the best riders in the world burn laps.
I know, it seems so accessible. After the test track, we went to Chipotle for lunch, and there was Cianciarulo and  Jason Anderson standing in line. ‘Sorry, we aren’t following you [laughs]!’ Actually, I might have gone all super-fan but the guys with me would have been embarrassed! 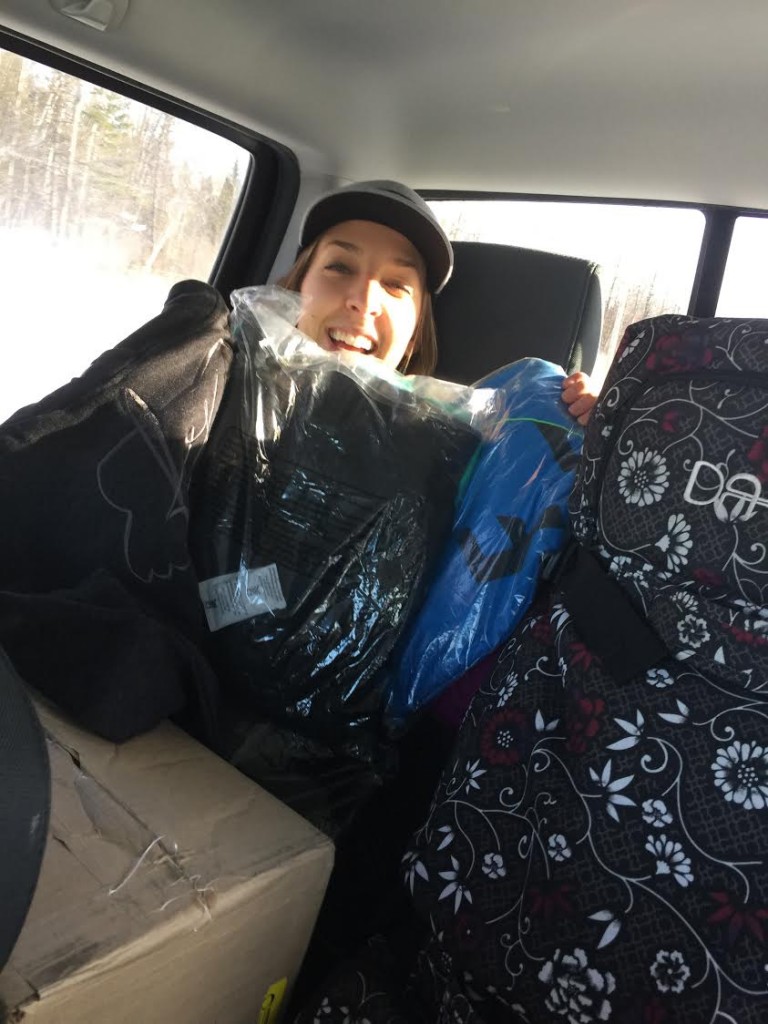 “We got some sweet Fox gear to wear during the trip!” says Nicole.

Between the racing, test tracks and hot spots like Chaparral and Pro Circuit, what was the coolest part of your SoCal Supercross weekend?
Oh man, the coolest part? Now that I think about it, being at the test track because we were so close to them. At the Supercross race is awesome but there are so many people and you’re way up in the stands. It’s like you said, anyone can go and do that (watch riders at the test track), but we were the only people doing it. We felt privileged, like we had special access to watch them. It was really neat watching them in that environment; they’re more like real people. You see them talking to their trainers, pointing to parts of the track; they’re not just celebrities that you see on TV.

Who was the most interesting person that you met on the trip?
We got to meet motocross writer, Brent Worrall. He came over for dinner to the house where we were staying at. It was fun meeting and talking with him.

Was this your first time to California?
I’ve been to LA for half a day, but it was a drive through type thing. We had five or six days this time around, but it went by really fast because we were doing a lot of motocross stuff. We walked around Hollywood and downtown and spent a day on the beach.

In the A3 pits, getting the gold from the Monster Energy Kawasaki Team.

Johnny and Kevin are a lot of fun to hang out with. I’m sure there were lots of laughs and stories along the way.
Oh yeah, it was so fun. I’m glad we went down with them and we all hung out in a big group, including Dylan Wright. We had the house with everyone together and flew down together. It was nice.

Going back to your own racing, which classes do you ride in?
I generally do the beginner class and women’s class. The Beginner class can be a little scary at times [laughs] but it’s racing. They’ve added more races with MMRS, so I want to do all of the races if I can. I’ll do the Women’s National at Sand Del Lee again, and I would like to try the Gopher Dunes and Deschambault Nationals. I’m hesitant to do it, if I’m way back in the pack. I hate to say that, but that’s what it is. There is a Women’s B class at the MMRS races and I did really well at the Madoc National last year–I even got a holeshot! I think that was awesome. I can get confidence being up front, racing with people that are similar speed, instead of being someone in the back of the pack. If I can commit more time to it (riding racing) this summer, I know I can improve a lot more.

Where do you practice and ride during the summer?
I practice at Sand Del Lee most of the time. 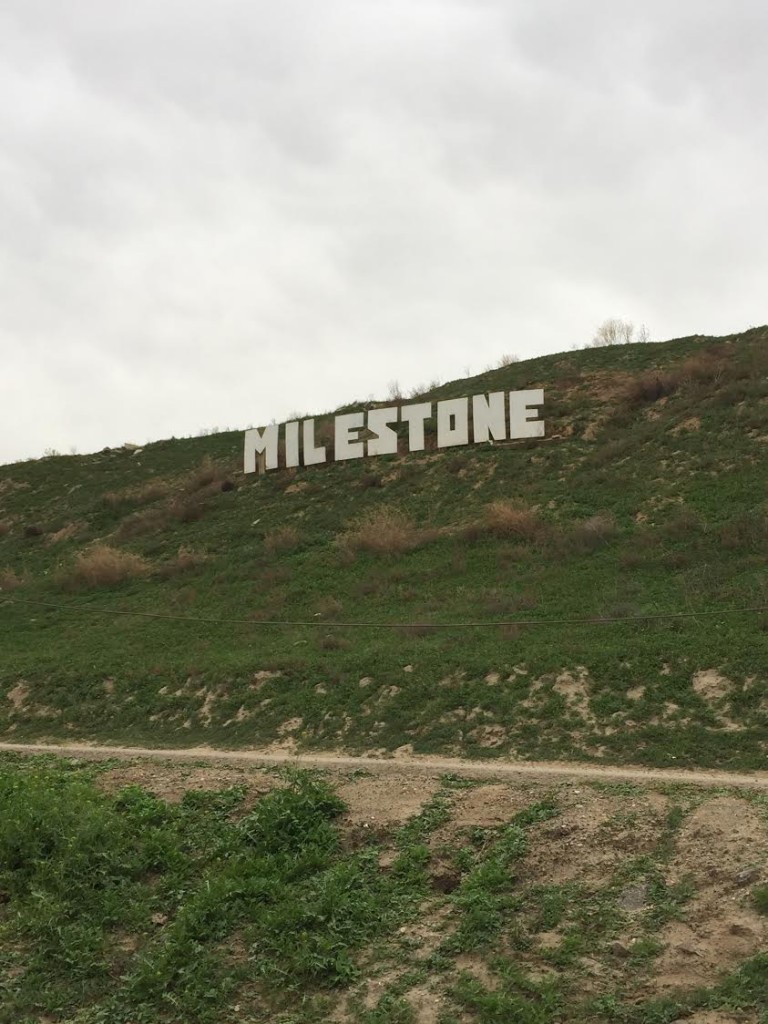 Have you had a chance to ride at a Gopher Dunes, Moto Park, Walton or elsewhere?
I haven’t been to many tracks that are further southwest. I went to Muttco for an MMRS race, I’ve been to X Town and Deschambault in Quebec and a couple tracks in Nova Scotia, but they were just for practice. I want to race Deschambault because I’ve been there before. If I race Gopher Dunes, I want to go there before hand … at lease once. I know that will be a tough track.

Before I let you go, do you feel like flying down to California, watching Anaheim and experiencing a taste of that lifestyle gets you more fired up to go racing when the snow melts here? That’s a pretty amazing experience to have so early in your moto career.
Yeah! I think so for sure. It reaffirms reasons why I want to do this sport. It motivates me for next season. We’re getting close to the season up here, and now I’m even more motivated to go the gym and get ready for my own season.

Awesome. Well thanks for chatting Nicole, congrats again on winning MX101’s Factory Fan contest and good luck in your 2015 race season!
Thanks a lot for calling. It was a lot of fun and I appreciate the guys at MX101 for putting on such a great time. 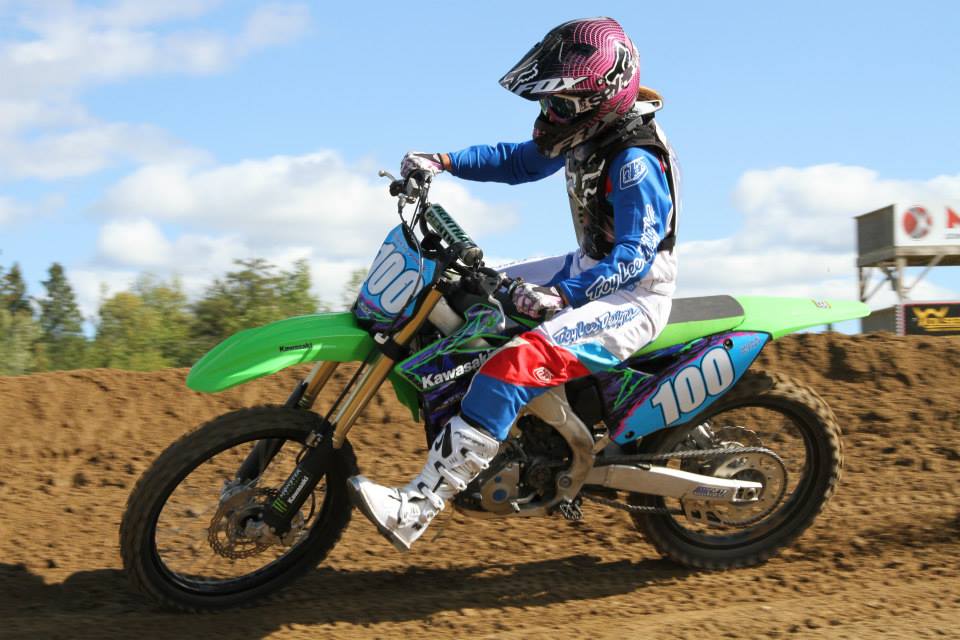 Nicole tearing it up at the Sand Del Lee track. Photo by  Stephan Chagnon