A column by Dylan Wright

A week and a half ago, I was lucky enough to be invited to be part of the ‘Factory Fan Trip‘ to California to enjoy the Anaheim 3 leg of the Supercross series, which many of us refer to as “A-3.” It was five glorious days of nothing but sun, fun, friends, and dirt bikes.

Enjoying a break from the moto shops and tracks during MX101’s ‘Factory Fan’ trip to Anaheim, California.

I don’t think there’s a dirt bike racer out there who doesn’t dream of making the trip to California. For most people, this involves images of beaches as well as the glitz and glamour of Hollywood. Well, the beaches were epic, but other than that, let me tell you that the reality of Hollywood comes nowhere near to living up to the hype. It was a typical big city with too much traffic, street people, and litter. The only star we got to rub elbows with was Johnny Grant (our very own MX101 guy who managed to find a Hollywood star with his name on it on the walk of fame).

While I didn’t get to train, ride or race in California (… at least, not this time), I got to see the test tracks where the world’s best racers do. Imagine a mountain. Now imagine a winding road that zig-zags across the front of this mountain taking you to one test track after another. (Who cares about Rodeo drive people! This is the drive that matters!)  The KTM, Yamaha, Kawasaki and Honda test tracks are literally minutes from one another. While some facilities allowed us to watch some of the supercross greats in training, others were more strict and wouldn’t let us catch a glimpse.  The good news is … we got to see these guys in action at Angel Stadium … live … for Anaheim 3. It was awesome!

There were lots of good times during this trip. It was nice to have the opportunity to get to know some of our loyal Sand Del Lee riders. As the Factory Fan trip winner, Nicole MacDonald called most of the shots during our SoCal vacation and didn’t disappoint. (Thank God she was about the dirt bikes and not only the shopping, ha ha!) It was also nice to hang out with Chris Holliday. Most of us see him lots on race-day because he’s the one at the finish line waving at us with whatever flag is appropriate at the time. (Thanks for all the laughs! You guys were great to travel with!)

Since we weren’t the only Canadians to make the trip for A3, I also had chances to chat with Brent Worrall (host of the Canadian Moto Show), Chris Pomeroy (editor of MXP magazine) and Al Brown (our MX101 team engine builder during last year’s race season).

We managed fit in so much stuff in the little time that we were there. I couldn’t possibly fit in every detail in this blog. So here is how I would like to sum up the impact of my A3 experience: Appreciation. Anticipation. Ambition. 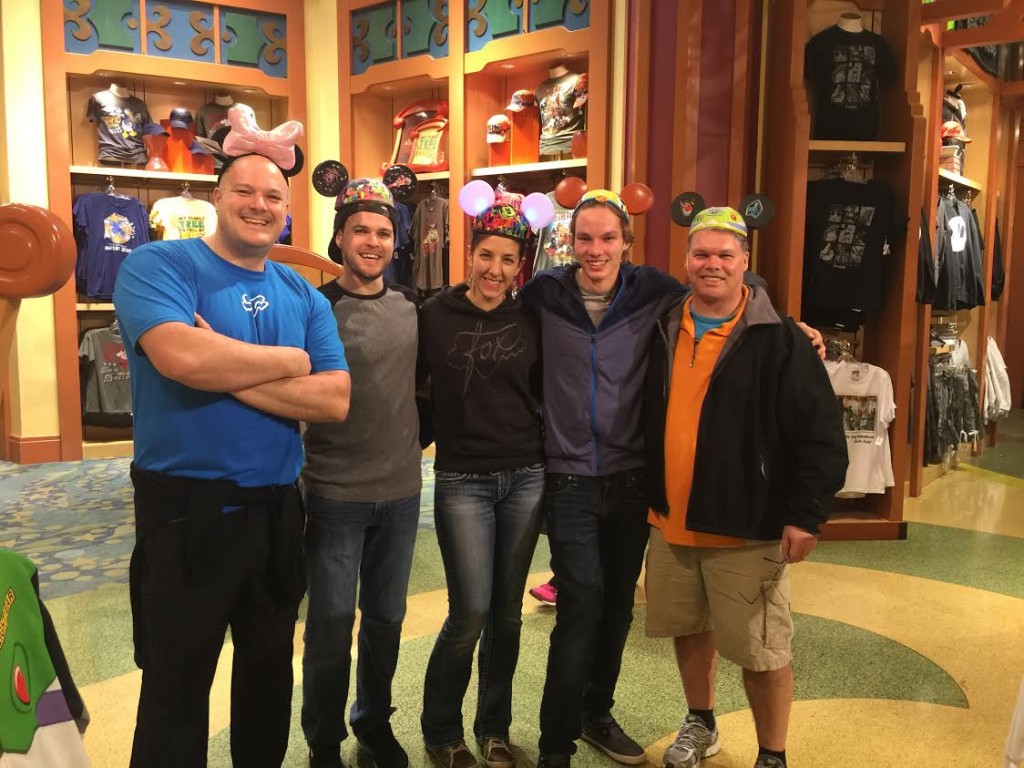 Enjoying a few laughs at the Disney store: MX101’s Kevin Tyler and Johnny Grant (outside left and right); Chris Holliday and Nicole MacDonald (middle left) and me, the author, Dylan Wright).

Appreciation
As a motocross racer, you count yourself lucky when you find sponsors who believe in you and are willing to invest in you and support you with products and funding. Then there’s the sponsor who goes above and beyond providing you with the best bikes, parts, gear, training and facilities possible to help you succeed on the track. They also help you work through the mental and strategic part of racing that is so often overlooked in sport (and I realize I still have lots to learn here). They look for ways to keep you motivated and inspired, year-round, not just during the race season.

Kevin Tyler and Johnny Grant spend countless hours working on the Sand Del Lee track and devote many additional hours planning for their MX schools, race series and various other aspects of their amateur and professional motocross programs.

I think it’s safe to say that very few sponsors call up their racers and invite them to travel with them to a Supercross race in California. They didn’t have to. They chose to. And I can’t thank them enough for this trip and for all that they have done. And continue to do for me.

MX101 offers many learning opportunities. Sure they provide great MX schools for those wanting to learn to ride and race, but they also believe in creating a love for the sport and in the importance of inspiring their riders to challenge themselves and their limits. This leads me to the next two As on my A3 list. 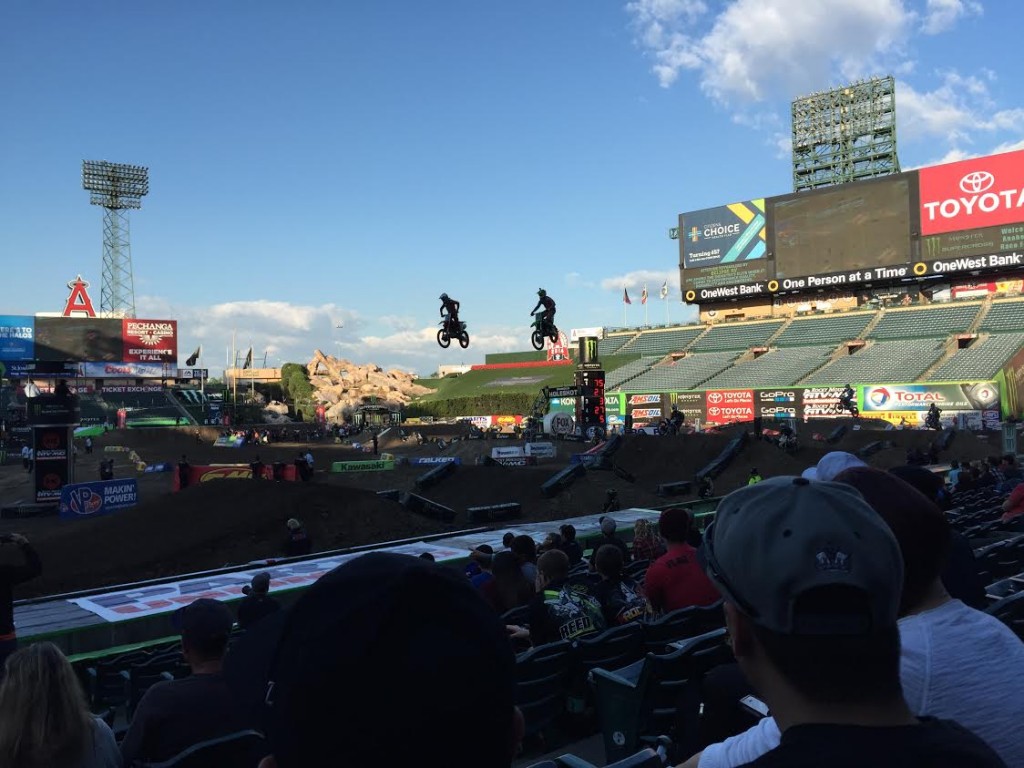 Anticipation
There’s nothing like a trip to California to witness Anaheim 3 in January for a Canadian who has just completed a tough semester of high school and has been unable to ride their dirt bike in months! First, I couldn’t wait for the semester to end. Then, I eagerly looked forward to this trip. Once there, I couldn’t wait to watch the supercross race. Now, I can’t wait to head out to Florida at the end of the month to get some on-track training. All this because I can’t wait to compete in the 2015 Rockstar Energy Drink Motocross Nationals!

It was so hard to just watch everyone ride. I wanted nothing more than to grab some gear and hop on a bike. While I’m grateful to my trainer, Rob Mouland at FitQuest, for working me hard and keeping me focused on my core and endurance workouts over the past few weeks, there’s nothing like real seat time.
One thing I wasn’t able to do as much as I would have liked last year, was enter some races while I’m down South. I won’t make that mistake again. I plan to participate in some races so I can battle with the fastest guys I can find. That’s definitely going to be an important change in my off-season training this year and just one more thing to add to the things I’m looking forward to with great anticipation. 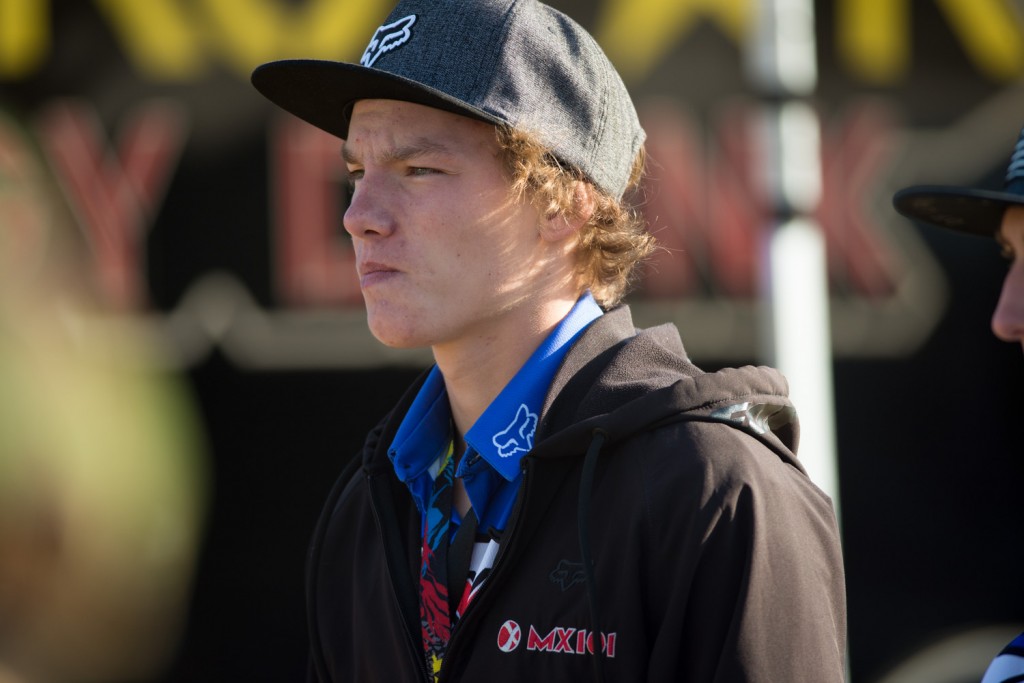 Ambition
During my trip to California, I got to walk on the KTM test track. I stood by the different test tracks and watched the likes of Dungey, Musquin, Anderson, Davalos, and Hill ride. Then I watched them, and some of the privateers, as they practiced and tried to qualify for the night show at Anaheim 3 Supercross at Angel Stadium. I couldn’t help thinking that maybe I could actually qualify for a supercross main event. It made me think that I would like to be one of the few Canadians in history who manages to successfully qualify for a main and perhaps even podium someday.

With that goal in mind, I realize that there’s a lot of work to do and much to learn, but I’m planning to do what it takes to get there. First, I want to achieve success at home and earn a Canadian title. I may be only 17-years-old, but I believe I can win a championship, and 2015 just might be the year to make it happen.

While I realize that there are no guarantees in life, one thing is for sure … no one will work harder to make it happen. I left California motivated and inspired to kick off what I hope will be a great 2015 season!